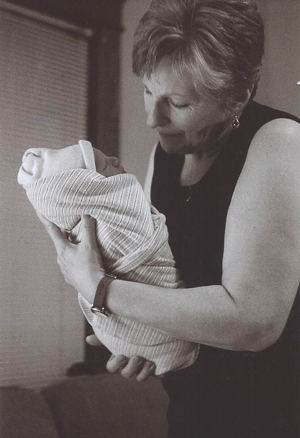 My name is Robin Lynn Lavis; I was born at Saratoga Hospital in Detroit, MI on February 12, 1956. I was in a hurry. When my mother, who was born at home, entered the hospital, they rushed to give her drugs to sedate her (commonly referred to as “Twilight”). When she awoke, her baby was gone. She had many stitches and in the days to follow, was bound and given drugs to dry up her milk supply.

That all changed with me…. I had my first baby in the hospital in 1983. I knew about homeBirth but I was hesitant. I read every book I could get my hands on and tried to educate my OB about natural vitamins, natural birth, etc. I thought we had an understanding of my birth plan, which was totally disregarded by my obstetrician and the hospital staff. I even had a hard time breastfeeding her because they kept giving her bottles, despite my requests. Helpless and after much negotiation, I left the hospital with my baby while struggling with a severe postpartum infection.

My second and third babies were born at home with a competent midwife. My husband and I birthed our children, just the way we planned, almost. My husband caught our babies and our midwife assisted us. I planned what music I would listen to, what I would eat, drink and so on… However, our son was in a hurry, just like his momma! The midwife and her assistant made it just in the nic of time! Our daughter Sarah, which was our second homeBirth, gave all of us some time to get ready.

After my first homeBirth, I became a homeBirth advocate. When my sister-in-law became pregnant with her first child, she decided to give birth at home with the same midwife that helped me. I assisted her and her husband throughout her labor and birth. What a blessing… Not only did they have a most precious gift but I finally found why God gave me the gifts that He did and how to use them.

For the next 4 years, I continued to do labor support for couples at home or in the hospital. It became very important to me to make sure that the women I served had the care that they hoped for and to see them empowered by birth and not over powered, to see babies left in their mother’s arms, brought to the breast instinctively and without interruption.

In 1991 I contacted a midwife whom I had met over the years and highly respected. Her name is Linda Honey from Detroit, Michigan. She accepted me as an apprentice immediately, for which I will always be grateful. Her program consisted of didactic as well as clinical training. Since I was planning on moving up north I also apprenticed with another practice called the Labor of Love in Romeo, Michigan. I especially liked the differences of the two practices, which allowed me to broaden my scope concerning the art of midwifery.

On June 4, 1994, we moved to the Traverse City area from St. Clair Shores, which is just north of Detroit. Moving north has been a dream of mine and my husband’s since we met. I thank the Lord for giving us the courage to do so. It has been difficult at times but we do love it here and now it is home…

I hope that this has given you some insight on who I am and why I feel called to do the work that I do.

I look forward to meeting with you!